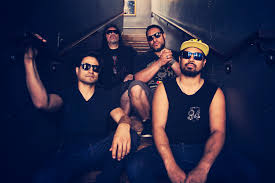 Celebrating 20 years of musical success, the band is fresh off of their month-long Legacy tour in England.

Both are pleased with the feedback.

“The boys are really excited about this chapter. We have been working hard to bring y’all some new fire… It’s sounding great to our ears and we can’t wait to share with you! ‘ Addicted’ is the first of a few singles before we hit you with our fifth studio album,” said the lead singer.

The group members are also working with some of reggae’s greats, including Clive Hunt, Jimmy Cliff and Sly and Robbie, during their visit.

Addicted was released on October 5 via Zojak World Wide. The track has an accompanying video.

Katchafire are an eight-piece band which has thousands of fans around the globe.

They are known primarily for bringing a universal vibe with their sound built on foundations of classic roots reggae, RnB, funk and modern dancehall; fusing with slinky pop, cool grooves and always uplifting vibes.

The band’s forthcoming album will feature collaborations with Jamaica’s finest. Their next single, Way Beyond, will be released later this month.