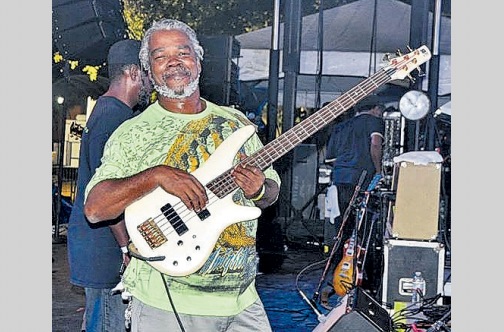 THOUGH he has played on countless hit songs and several Grammy- winning albums, Christopher Meredith is not a household name.

The unassuming bassist has been a member of Ziggy Marley and the Melody Makers and Stephen Marley’s band for almost 30 years.

A self-taught musician, Meredith has played on dancehall classics such as One Blood by Junior Reid and General Trees’ Gone A Negril.

As for albums, his credits include Grammy winners Conscious Party and One Bright Day by the Melody Makers; Burning Spear‘s Calling Rastafari and Lauryn Hill The Miseducation of Lauryn Hill; as well as Mutabaruka’s Check It!

Recently he spoke to Howard Campbell about his career.

Howard Campbell: When did you become a musician?

Chris Meredith: I have been playing almost 40 years. It started when I was a kid, six or seven. I had a toy guitar and started banging it. Then I met (bass player) Junior Moody who showed me the basics. I also met (drummer) Squiddly (Cole) an’ we used to practise together. I use to practise at my school/church (St Peter Claver Primary), then I met (guitarist Earl Smith) Chinna who improved my skill/knowledge of music and we made a band called High Times Players and started recording and doing shows.

HC: Who are your biggest influences?

CM: Bob Marley, Chinna, (bass player Aston Barrett) Family Man, Sly and Robbie, Roots Radics, Jaco (Pastorius) and Stanley Clark, among others. Bob for his great music, Chinna for his teaching, Family Man and Robbie for all the great bass lines we grew up with, Jaco and Stan for great bass playing.

HC: How long did it take to develop your own sound?

CM: It didn’t take long. I love all good music, so when you listen to a lot of music your knowledge get wide, so I have a lot of styles to incorporate and make my own.

HC: Are there any songs you are particularly proud of playing on?

CM: I am proud of Turn Your Lights Down Low remix by Bob Marley and Lauryn Hill; Under Mi Sensi by Barrington Levy, Just One of Those Days by Sizzla, the Lauryn Hill album, Amy Winehouse Fade To Black, Burning Spear’s Calling Rastafari.

HC: What kind of equipment do you use?

CM: “I use an Ibanez sound gear with Bartolini pickups… sounds great! I have been using it for over 10 years and it played all those hits.

HC: Most bass players now use five or six strings unlike the old days when it was four. Has that made you a better musician?

CM: No, I am not a better musician. The music is from within; four or five string doesn’t matter.”