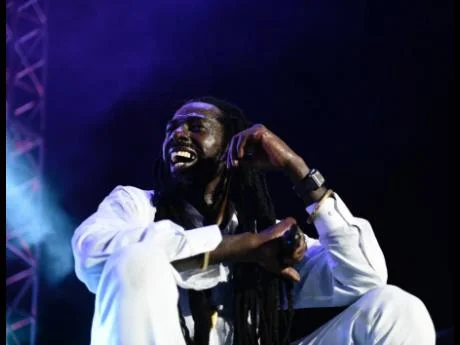 BujuLive: The Long Wait Is Over – Gargamel Delivers

It was a prayerful Buju Banton who graced the stage at the National Stadium in Kingson on Saturday night asking, “have mercy on me”.

Dressed in all white, the ‘Gargamel’ hit the stage about 11:20 p.m., and it was pandemonium as he went on bended knees.

From his opening to Not an easy road onwards, he did not miss a beat. It was Buju in his element, from his familiar mannerisms to his stage presence, it was as if the years of him being away simply disappeared. His fans can rest assured, the reggae artiste is truly back, and in full form.

With his locks hanging free, and a glimmer in his eyes, the Gargamel delivered an almost two-hour set, hopping across the stage with youthful agility.

Classics such as Hills And Valleys and Destiny, were impecably delivered backed by his Til Shiloh bandmates.

Not forgetting his dancehall roots, Buju let go some waist-moving hits like Champion and Too Bad.

But he didn’t do it all alone. He was joined for a moment by Stefflondon; Marcia Griffits, whom he said was like a mother to him; his longtime collab partner Beres Hammond – the two were as in sync as always; and his pal Wayne Wonder. He ended the show in the same vein in which it started, collabrating with Gramps Morgan for Psalm 23.

“We love you!” were his finals words as his two-hour long performance came to an end and fireworks lit up the night sky over Kingston’s National Stadium.