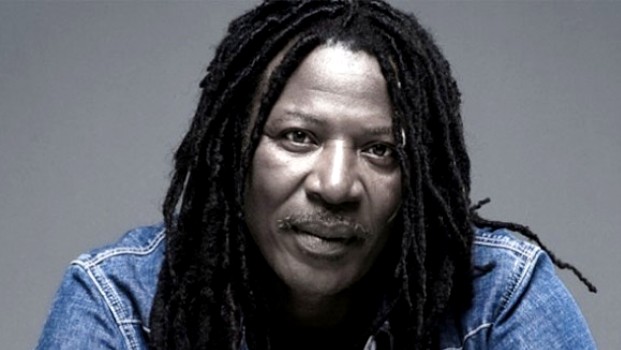 Hailing from the Cote d’Ivoire, Alpha Blondy is among the world’s most popular reggae artists. With his 12-piece band Solar System, Blondy offers a reggae beat with a distinctive African cast. Calling himself an African Rasta, Blondy creates Jah-centered anthems promoting morality, love, peace, and social consciousness. With a range that moves from sensitivity to rage over injustice, much of Blondy‘s music empathizes with the impoverished and those on society’s fringe. Blondy is also a staunch supporter of African unity, and to this end, he sings to Moslem audiences in Hebrew and sings in Arabic to Israelis. Some of his best-known songs include “Cocody Rock,” “Jerusalem,” and “Apartheid Is Nazism.”

He was born a member of the Jula tribe in Dimbokoro and named Seydou Kone, after his grandfather. His grandmother, Cherie Coco, raised him. He was always a rebellious child and for this, Coco named him “Blondy,” her unique pronunciation of the word “bandit.” When he started performing professionally, he took on the name Alpha (the first letter in the Greek alphabet) so his name literally translates to “first bandit.” Though he grew up listening to African folkloric music such as yagba and gumbe, his primary musical influences were such Western bands as Deep Purple, Pink Floyd, Hendrix, the Beatles, Creedence Clearwater Revival, and soul artists like Otis Redding. Later Bob Marley‘s music tremendously affected Blondy. Though he wanted to become a musician, his family expected him to become a respectable English teacher. He studied English at Hunter College in New York, and later in the Columbia University American Language Program. Outside of class, he would play music in Central Park and in Harlem clubs where occasionally house bands would let him sing his Bob Marley covers in French, English, and various West African languages. One night, record producer Clive Hunt heard Blondy sing and invited him to record six songs. Unfortunately, Hunt absconded with the tape. Shortly afterward, he returned to the Ivory Coast, where he was arrested for threatening the ambassador at the New York Ivorian embassy because the diplomat felt that Blondy‘s English was too good for him to be an Ivorian native. While at the police station, Blondy‘s temper again flared and he slapped a policeman (after the cop slapped him first). He spent a week in jail and then stayed briefly at the Bingerville Asylum in Abidjan, where he was declared reasonably sane and released. Soon afterward, he began honing his songwriting and performing skills. Later, he dedicated an album to the patients of Bingerville.

Blondy got his big break from friend Fulgence Kass, an employee of Ivory Coast Television who helped him land a spot on the Premiere Chance talent show. Singing three of his own tunes plus Burning Spear‘s “Christopher Columbus,” the young artist was a hit with the audience. Blondy then hooked up with producer G. Benson who recorded his eight-song debut album Jah Love in a single day. The most popular song, “Brigadier Sabari,” was an account of Blondy‘s run-in with an Abidjan police street raid in which he was nearly beaten to death. It was the first time a West African artist had dared to mention random police brutality in public. After releasing the album, he and the newly formed Solar System band signed to EMI. They recorded his second album, Cocody Rock, in Paris in 1984. Later he returned to Tuff Gong to record his third album, Jerusalem (1986). By the release of his 1987 album Revolution, Blondy had established himself as an international artist. Three years before he had been voted the number one artist by a Radio France international poll. His popularity continues to grow, and he continues steadily releasing albums. His 1992 album, Masada, was released in over 50 countries around the world and went double gold in France. Yitzhak Rabin followed in 1998; Paris Percy appeared in spring 2001. Although it was recorded in 1999, the album Elohim appeared in 2002 in Europe and three years later in America. The career-spanning Akwaba: The Very Best of Alpha Blondy was released in 2005, then Jah Victory followed in 2007. The 2011 release Vision was issued by the Wagram label, while his 2013 effort Mystic Power launched his relationship with the VP imprint. The veteran reggae label issued his 2015 release Positive Energy, which featured guest appearances from Tarrus Riley and Ijahman Levi.
Source:Artist Biography by Sandra Brennan
http://www.allmusic.com/artist/alpha-blondy-mn0000016944/biography